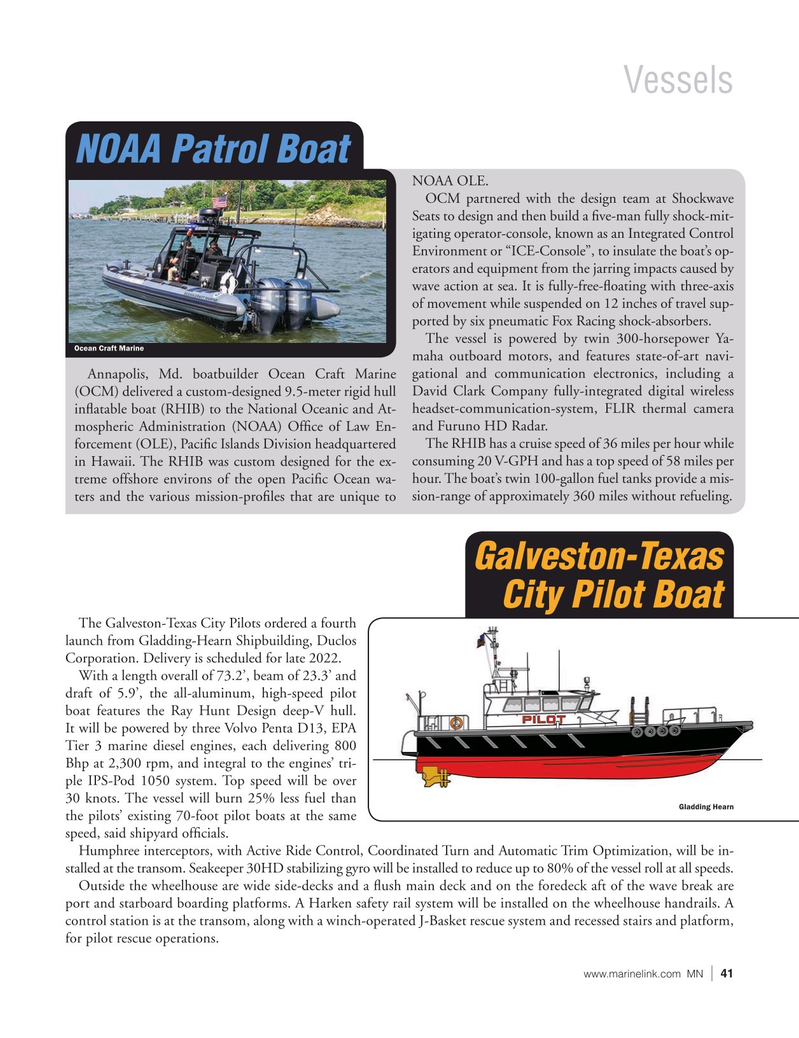 OCM partnered with the design team at Shockwave

Environment or “ICE-Console”, to insulate the boat’s op- erators and equipment from the jarring impacts caused by wave action at sea. It is fully-free-? oating with three-axis of movement while suspended on 12 inches of travel sup- ported by six pneumatic Fox Racing shock-absorbers.

The vessel is powered by twin 300-horsepower Ya-

forcement (OLE), Paci? c Islands Division headquartered The RHIB has a cruise speed of 36 miles per hour while in Hawaii. The RHIB was custom designed for the ex- consuming 20 V-GPH and has a top speed of 58 miles per treme offshore environs of the open Paci? c Ocean wa- hour. The boat’s twin 100-gallon fuel tanks provide a mis- ters and the various mission-pro? les that are unique to sion-range of approximately 360 miles without refueling.

Corporation. Delivery is scheduled for late 2022.

It will be powered by three Volvo Penta D13, EPA

Humphree interceptors, with Active Ride Control, Coordinated Turn and Automatic Trim Optimization, will be in- stalled at the transom. Seakeeper 30HD stabilizing gyro will be installed to reduce up to 80% of the vessel roll at all speeds.

Outside the wheelhouse are wide side-decks and a ? ush main deck and on the foredeck aft of the wave break are port and starboard boarding platforms. A Harken safety rail system will be installed on the wheelhouse handrails. A control station is at the transom, along with a winch-operated J-Basket rescue system and recessed stairs and platform, for pilot rescue operations.