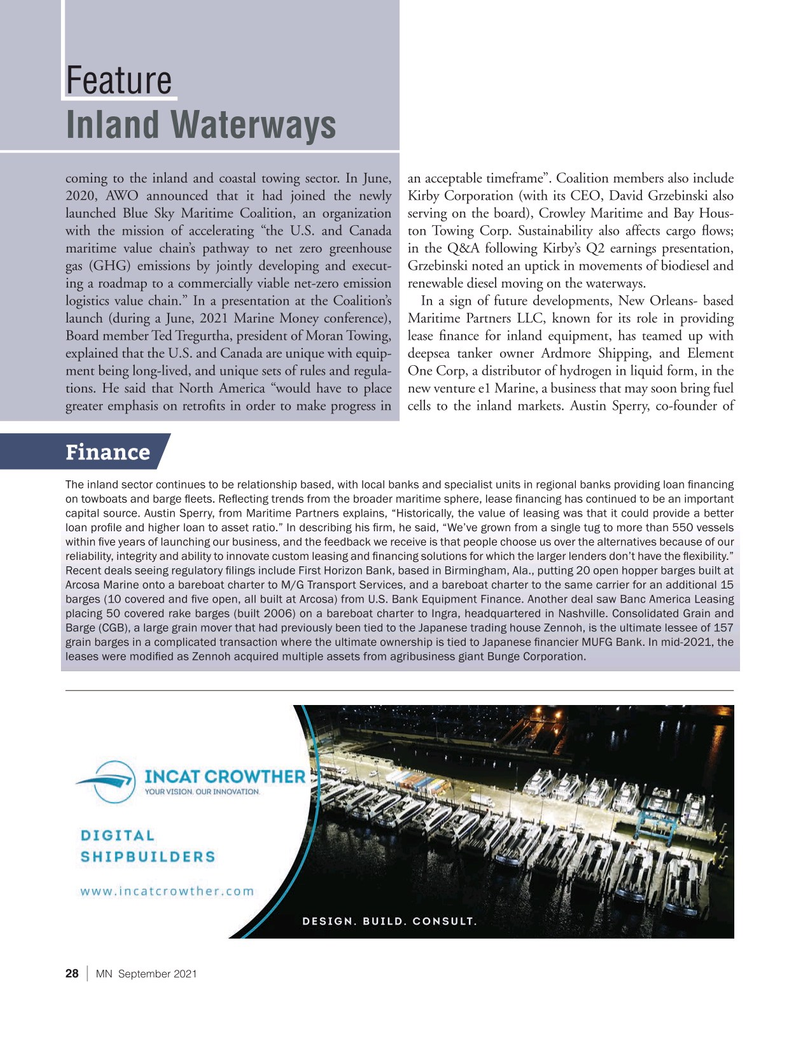 Inland Waterways coming to the inland and coastal towing sector. In June, an acceptable timeframe”. Coalition members also include 2020, AWO announced that it had joined the newly Kirby Corporation (with its CEO, David Grzebinski also launched Blue Sky Maritime Coalition, an organization serving on the board), Crowley Maritime and Bay Hous- with the mission of accelerating “the U.S. and Canada ton Towing Corp. Sustainability also affects cargo ? ows; maritime value chain’s pathway to net zero greenhouse in the Q&A following Kirby’s Q2 earnings presentation, gas (GHG) emissions by jointly developing and execut- Grzebinski noted an uptick in movements of biodiesel and ing a roadmap to a commercially viable net-zero emission renewable diesel moving on the waterways.

logistics value chain.” In a presentation at the Coalition’s In a sign of future developments, New Orleans- based launch (during a June, 2021 Marine Money conference), Maritime Partners LLC, known for its role in providing

Board member Ted Tregurtha, president of Moran Towing, lease ? nance for inland equipment, has teamed up with explained that the U.S. and Canada are unique with equip- deepsea tanker owner Ardmore Shipping, and Element ment being long-lived, and unique sets of rules and regula- One Corp, a distributor of hydrogen in liquid form, in the tions. He said that North America “would have to place new venture e1 Marine, a business that may soon bring fuel greater emphasis on retro? ts in order to make progress in cells to the inland markets. Austin Sperry, co-founder of

The inland sector continues to be relationship based, with local banks and specialist units in regional banks providing loan ? nancing on towboats and barge ? eets. Re? ecting trends from the broader maritime sphere, lease ? nancing has continued to be an important capital source. Austin Sperry, from Maritime Partners explains, “Historically, the value of leasing was that it could provide a better loan pro? le and higher loan to asset ratio.” In describing his ? rm, he said, “We’ve grown from a single tug to more than 550 vessels within ? ve years of launching our business, and the feedback we receive is that people choose us over the alternatives because of our reliability, integrity and ability to innovate custom leasing and ? nancing solutions for which the larger lenders don’t have the ? exibility.”

Barge (CGB), a large grain mover that had previously been tied to the Japanese trading house Zennoh, is the ultimate lessee of 157 grain barges in a complicated transaction where the ultimate ownership is tied to Japanese ? nancier MUFG Bank. In mid-2021, the leases were modi? ed as Zennoh acquired multiple assets from agribusiness giant Bunge Corporation. | MN September 2021 28